From All Hands Active Wiki
Jump to navigation Jump to search

The cupcakes are both heavily modified from their original state. Aside from the chassis saying Cupcake, refer to the documentation shown below.

A slic3r config bundle for all various printers and materials is located here: https://github.com/allhandsactive/AHA-3DPrinters/blob/master/AHA-Slic3r_config_bundle.ini

Lots of software exists to create models. As long as the software can export to STL file format, you can print your model. Check out the following software packages that we recommend.

The slicing software needs your 3D model as an STL file before it can slice it. Slicing produces a file that has GCODE to describe the tool head movements for each layer. It is important that your STL file only includes one solid water-tight object. Missing faces, open vertices, and improper normal calculations will cause the slicer software to produce errors. You can fix some of these issues in an automated fashion by using NetFabb Basic, Blender (recalculate normals), and MeshLab's repair mode.

How to fix an STL

You've got holes or inverted normals? You can fix this by hand, try Blender or Meshlab. For a quick fix either try netfabb basic on client or NetFabb cloud [10]. These can fix basic problems and possibly produce a better file. You need 1 shell, non-inverted normals, and no holes to get a good print.

The newest versions of Slic3r will automatically try to fix holes and other errors in your stl files. This can work, but make sure that your model hasn't changed dramatically before printing. Take a look at it in the 3d view.

You can also try these awesome pieces of software:

This is a description of the tool path that is generated by a slicer. The file includes commands which instruct the printer on how to move to produce the final object

Replicatorg converts a GCODE file into this reduced and compressed file type. This is equivalent to the GCODE but the smaller and easier to parse file type can be read off an SD card with less work. Use the build to SD card function in Replicatorg to produce this file. It can also be created with Makerbot's software 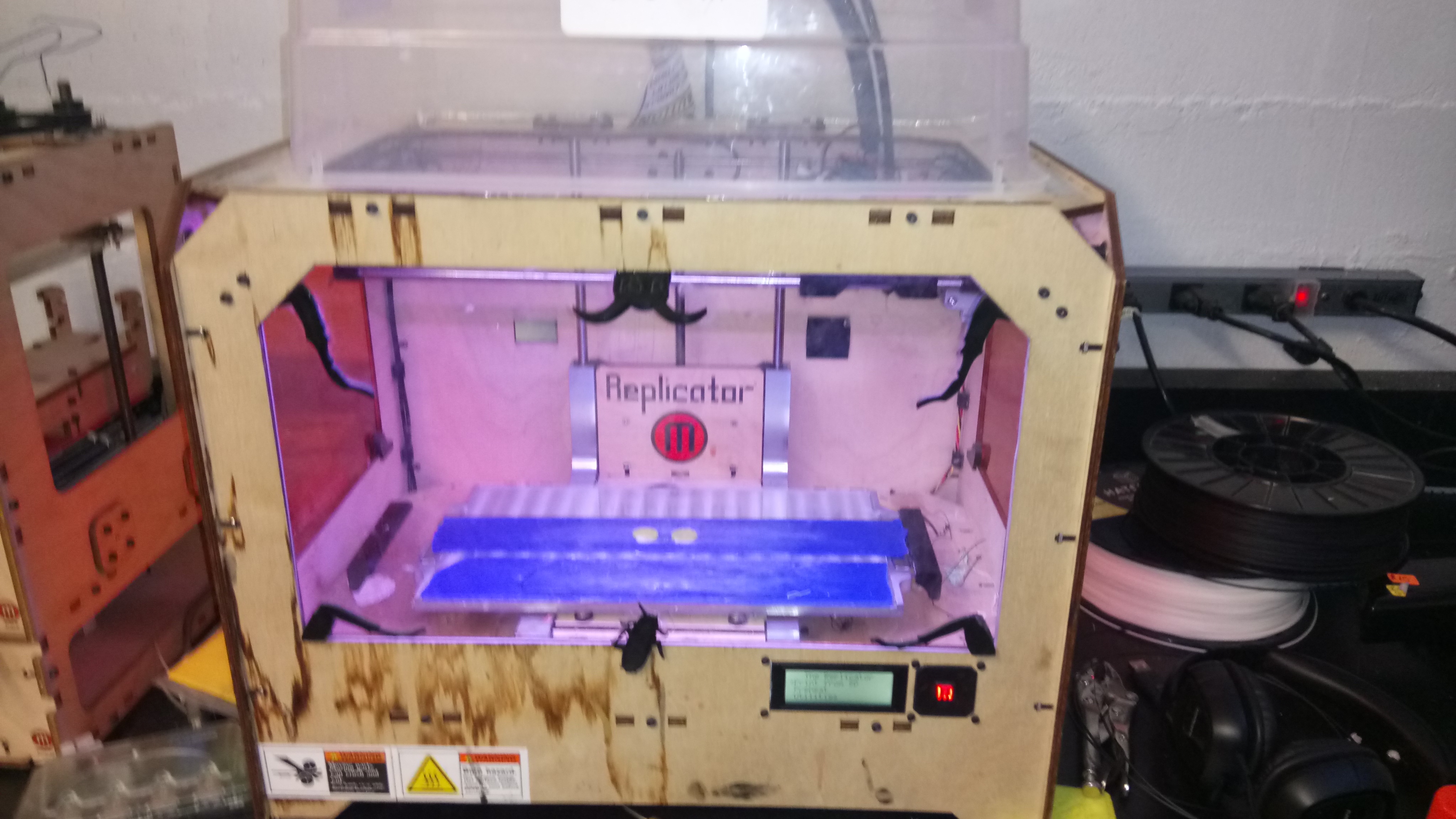 What do I need to run Makerbot Replicator?

This is a Prusa i3 clone. It can print with both PLA and ABS. It has an SD card and a heated bed that can be controlled from the front panel. Pronterface works at 115200 baud and slicer configs are available for several plastics. Get the latest Slic3r config bundle at https://github.com/nristow/AHA-3DPrinters .

The printer has been tuned and at low speeds does a really nice job with PLA. The current configuration can print parts with a layer thickness down to 100 microns. Increasing the print speed should be fine, but you will notice more waviness around corners and dimensional accuracy will suffer.

Gluestick works great for keeping ABS stuck to the bed. Blue tape can also be used. Heat bed to ~110C. Filament to 235-240. PLA is recommended.

Heat the nozzle to 190-230C depending on the loaded filament. Depress the lever on top of the nozzle, next to where the filament is loaded, and pull the filament out.

To replace, depress the lever next to where the filament feeds and push the new filament down the hole until you see it extruding. The filament needs to through an internal tube to reach the extruder head. If it misses, the filament will start winding around the stepper gear. It may take several tries to thread the filament correctly. Cut the end of the filament to an angle to help guide it into the tube.

If changing filament types (eg, from ABS to PLA), the bed height will need to be adjusted to compensate. This can be done fairly quickly by using pronterface to fly the head to the 4 corners of the bed. Make sure that the head is 0.0 - 0.2mm above the limit switch. Then move the head 200mm to reach each corner. Adjust the screw under the head at each corner until the head is just above the bed.

When starting a print, if you notice that the filament isn't sticking, make sure that the bed is prepared correctly as noted above. Then raise the bed so that it is closer to the extruder head.

Questions? Want to help us build or document it?

This machine started as a Cupcake with Gen3 electronics and Gen3 Extruder.

DO NOT LEAVE THIS BOT PLUGGED IN WHEN NOT IN USE! If the power supply is on, the bot is on!

What do I need to run Creamcheese?

Printing with Slic3r and Pronterface

Connect to the printer using Replicatorg and open the control panel. Heat the extruder up to 220c (for ABS) and the platform to 110c. When at temp, release the latch on the extruder (blue spring part) and pull the filament upward.

Take the new filament and using wire cutters make sure the end is flat. Feed it down the tube in the extruder and when at the bottom, fasten the latch. Using Replicatorg run the extruder forward until filament comes out. Continue to run it until the color changes to a solid color. Changing from dark to light filament requires significantly more time running the extruder forward to clean it out.

Experimenting with the 3D printer configuration

The firmware for the 3D printer is included with the zip file of configurations found here: Tyler's repository of cool stuff! - Updated 10/04/14

The configuration.h file in the marlin directory includes all the settings necessary to run Creamcheese as it is currently tuned and configured.

If you are curious how we've done the calculations for running it or if you wanted to try out Creamcheese using Skeinforge instead of slic3r, we've done some work in the past. You can find it documented here: Experimental Config

Repetier-Host: A very limited trial was done using repetier host. The bot heated successfully and moved. Slic3r also picked up the config files provided in our zip. We did not try printing and found repetier to be rather resource intensive compared to pronterface. This was performed on 01/04/14 by Tyler W.

November 2014, installed Ramps1.4/Arduino board. Firmware loaded. The new controller cannot move the x-y stage, too much drag with original hardware. Need to print a low-rider x-y stage similar to what is installed on Creamcheese.

This machine was confirmed working on December 19th 2013 by Tyler!

This machine started as a Cupcake with Gen3 electronics and Gen5 Extruder. The DC extruder was upgraded by Ox to a Gen5/6+ stepstruder. The bot originally was given a 3G5D board but it never worked well. As a result, we did the ugly cable hack.

At some point, Ox decided to donate this bot to AHA!

===What do I need to run Blackbottom?=== (this section deprecated)

===How Do I run BlackBottom Cupcake?=== (this section deprecated) Using Slic3r, alter settings and produce gcode file. Use the following config to start: Blackbottom - 3MM ABS - BlackBottom (These show up if your XML files are in the right place!)

To fix warping on corners it is advisable to first put down a layer of blue painters tape or masking tape on the non heated build platform.

===Issues?=== (this section deprecated) If the bot moves from the center of the platform when you start a print make sure you have the following start g code and end gcode in Slic3r!

This is a very large delta printer (over 10 cubic feet of build volume) with a new heated bed design and some other new tricks. When we finally finish it, it should be among the biggest deltas and among the fastest DIY printers out there. Perhaps unsurprisingly, it is very hard for people without mechanical design background to design and build such a device. We're working on it!

The frame is designed and fabricated, motors mounted, heated build platform designed and built. Printed universal joints seeing too much tension from our huge delta geometry and snapping along shear lines, need redesign or sturdier print.

If you want to help, grab a tool and try to put a piece of the design together!

Up to date settings for Slic3r can be found here for all current printers. These settings give good results for most prints, but need to be tweaked for individual projects. It is highly recommended to read through the Slic3r blog and manual to learn what each setting does and how they can help make nice prints.

Heat the hot end to 220 Celsius. Unclip the paper clip from the extruder and pull the filament completely out of the tube. To replace, push filament up to hot end and clip extruder lever shut.